Year 3 had a great day out at Stonehenge. We learnt a lot and despite the cold we all thoroughly enjoyed ourselves. All the children were fantastic representatives for FJS and were very well behaved and enthusiastic throughout the day. … Continue reading →

On Wednesday, we opened our minds and widened our eyes as the universe unfolded above us in a pop-up planetarium.  One class at a time, we looked up at the wonders of space.  This was no simulation: these images were the real thing.  Every crater we saw on Mars or on the moon is actually there, photographed and documented.

We may not all want to do it for real, but no doubt there are budding engineers and scientists ready to contribute in some way to this exciting frontier area.

Thank you to Neil, who set everything up and let us handle space rock.  He also made us proud to live in a part of the UK where components for space craft are built and developed. 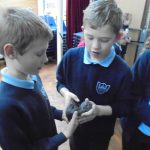 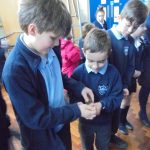 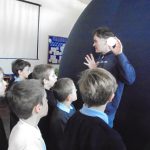 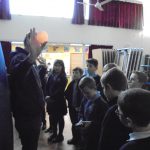 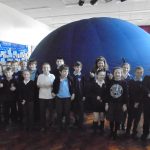 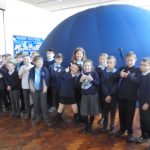 The show will go on!

After measuring and producing prototypes, we have started cutting out the pieces of our felt hats.

Next week we sew, sew, sew.

See you early on Thursday (8.45 am at the back door) for our hat show. 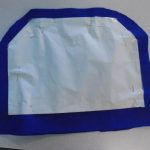 Year 5 have started investigating what it takes to construct a hat. Our challenge was to make a working hat in order to identify the different components and how they fit together. We have also thought about the shape and … Continue reading → 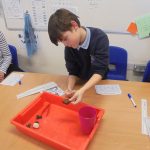 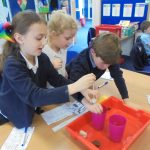 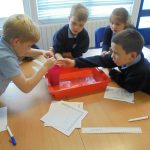 Question: ‘You are a type of weather which falls from the sky. Your friend is what the queen does.’

This was a snippet from conversations heard in Year 3 when we played Homophone Who Am I?. What a fun way to learn our spelling word meanings! 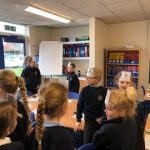 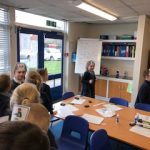 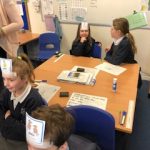 After five minutes of becoming an expert on their specialist planet, it was then a matter of speed to find out as much information about each of the other planets in a three minute date.

We think eight dates in an afternoon was really quite tiring, not to mention the fact we were also expected to make a fact file on everything we had found out – what a busy afternoon of science!

Once again, Fordingbridge Junior School was transformed into a world of literature for World Book Day. A great effort by children and staff!

We made the most of the snow, even when it started to disappear! Is there more to come this weekend?

Today in Maths we learnt about equivalent fractions. This means two fractions can equal the same amount. For example: 1/2 is the same as 2/4 or 2/6 is the same as 4/12. We’ve also learnt to shade in a fraction to show a half.

Snow again! What was the weather thinking? It must be out of its mind! It hasn’t snowed in Fordingbridge for four years – but this time FJS struck lucky!

On this exact date (28 February 2018), 6cm of snow came our way! At break time the children at FJS were playing with the snow, making snowballs, snowmen and much much more!

Even Miss Gray and Mrs Ellis were throwing snowballs, Mrs Ellis threw four and Miss Gray threw three, so Mrs Ellis won! We all had a brilliant time out in the crunchy, pearl, white snow! We hope it all comes back!