As a school, we were invited to attend a singing event at Godolphin School in Salisbury, which included singing workshops and a performance to parents at the end of the day. A group of 13 children from all years went along for the day who were joined by another primary school in the area, and all had a fantastic time.

After juice and biscuits on arrival (and break!), they learned some interesting breathing exercises to help them breathe properly for singing, which also involved laying on the floor. They then practised the five songs they’ve been learning over the weeks which included ‘Up on the roof’, ‘You’ve got a friend in me’, ‘When I grow up’ and an African song.

In the afternoon, the two choirs were joined by the Godolphin choir from Years 7 and 8 and the performance sounded beautiful. FJS children did the school proud because they performed wonderfully and behaved impeccably. The children also thoroughly enjoyed the long lunchbreak exploring the expansive grounds too! The school Council were lucky to be invited to The Regal Cinema in Fordingbridge. We had a lovely walk into Fordingbridge and enjoyed the experience of watching the film.

We watched the film Plastic Ocean, which was quite a hard hitting film about the effect of plastic pollution on sea life. As a result of watching the film we have decided to discuss what we can do to help the environment in school. 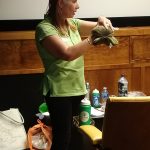